Since Blue Fish Canada’s federal incorporation and registration as a charity in 2012, the 2016 year has been our most productive year to date. As President, it’s my honor and pleasure to offer this accounting of a number of the many program accomplishments achieved over the past year.

Conferences:
In September Blue Fish Canada received a grant to participate in the 2016 Living Water Rally hosted by the Canadian Freshwater Alliance. Rally participants were presented a summary of our work with research aquariums of North America with specific focus on actions taken to include instructional program content of specific interest to anglers. Over 8-million Canadians fish recreationally, and are seeking knowledge to become even stronger stewards of their aquatic ecosystems. By BFC working with Aquariums, our reach to provide this knowledge is expanded. 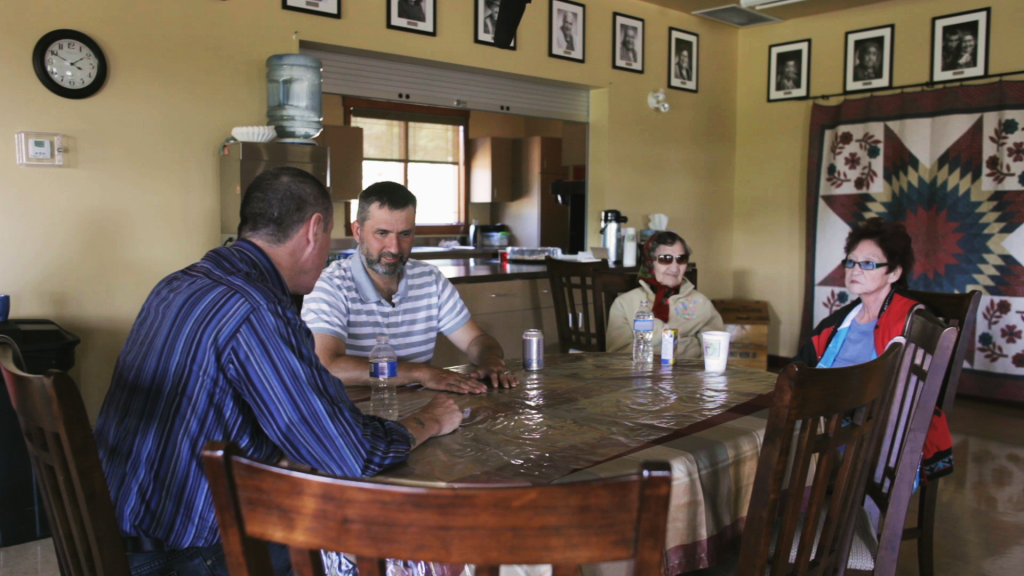 Rally organizers also hosted a special sneak-peek screening of our documentary, “What Lies Below”. Response from Canada’s leading water activists was outstanding. They loved the narrative of a blind angler and activist exploring Canada’s aquatic challenges, and the actions taken by people who live by and from the water. 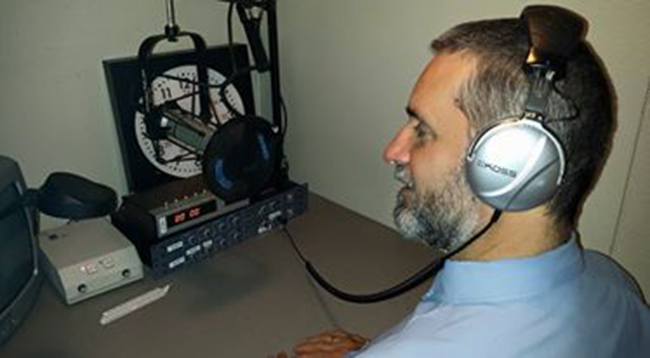 Lawrence in the CBC recording studio

The Canadian Broadcast Corporation produced an 8-minute radio segment with Blue Fish Canada to kick-off Family Fishing Day. We recorded the bulk of the segment on the shore of the Rideau River. It covered the work of Blue Fish Canada and encouraged families to enjoy the license-free fishing weekend.

Every second Tuesday Blue Fish is a featured expert guest on AMI’s Audio program, “Live from Studio Five” broadcast live across Canada on SiriusXM, Cable TV and the internet. Our contribution involves providing insight and analysis of topical news items of relevance to the environment. 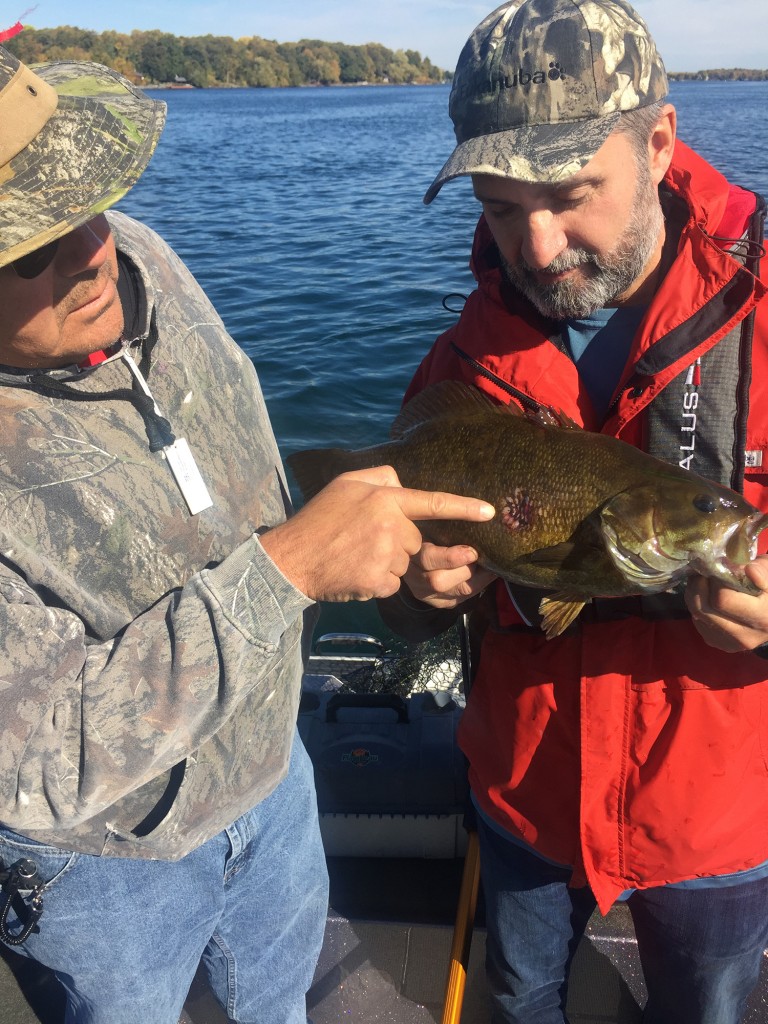 Public Service Announcements:
The 20 Stewardship Fishing Tips produced for Blue Fish have been airing on a number of podcasts and internet streaming services. Short information segments intended to educate anglers how to fish sustainably and protect their waters. More tips are in the works.

Lawrence speaking to Girl Guides on the shore of Dows Lake

Youth Initiatives:
A favorite annual event of the 150th Ottawa Girl Guides is the chance to go shoreline fishing with Blue Fish volunteers. The mentors provide the gear, and over 50 girls ranging in age from 6 to 16 catch plenty of panfish. A Q/A session follows to answer questions about the fish caught and released, and highlight important lessons learned about fishing sustainably. Many of the girls now can bait their hooks and release their catch. 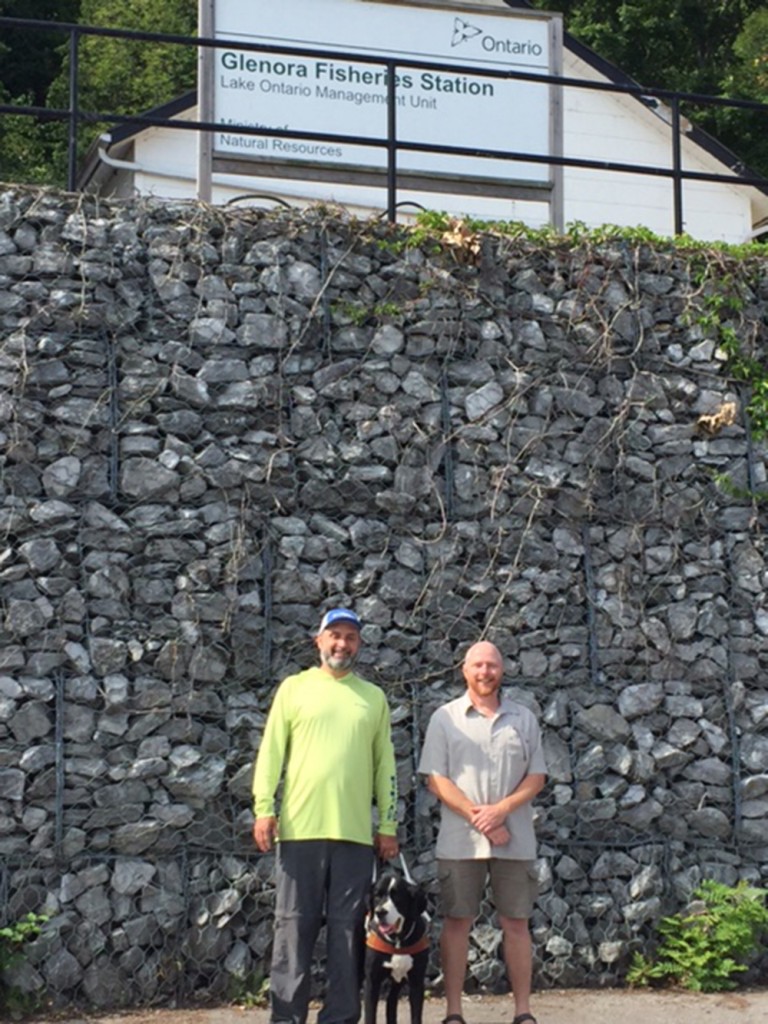 Podcasts:
The weekly Blue Fish Radio podcast continues to be featured on AMI Audio over SiriusXM, cable TV and the web, and on WRVO Radio Network One for a total of 12 times weekly. A number of partnerships have also been established to promote new episodes. Episodes can be streamed or downloaded from iTunes and Spreaker.Com. It’s estimated that well over 100,000 listeners hear Blue Fish Radio podcasts each week. 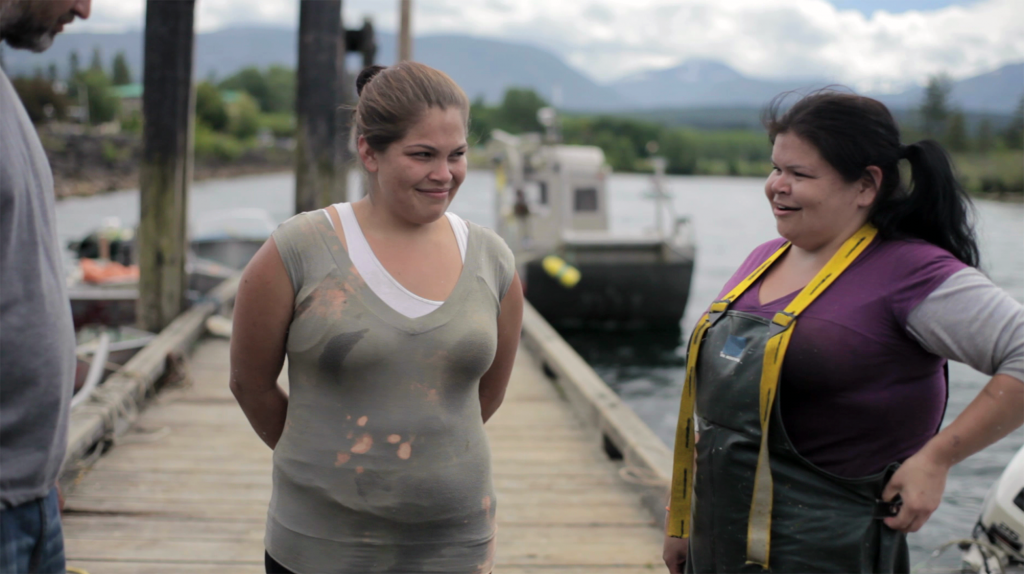 Documentary:
Following a highly successful sneak-peek screening of What Lies Below at the Living Water Rally, its premiere was held in Toronto at the Rogers Hot Docs Theatre. It went better than hoped. Over 600 people were in the audience and stayed for the Q/A session afterwards.

The following review is one of several:

From TheGate.ca: This year’s closing night film (screening at Hot Docs Ted Rogers Cinema alongside the festival awards ceremony) comes from Canadian filmmaker Emanuel Hoss-Desmarais, whose last film was his stunningly gorgeous debut feature Whitewash, starring Thomas Hayden Church as an alcoholic Quebecois plow driver who makes a deadly misjudgment. His follow-up is What Lies Below, an equally stunning documentary that focuses on Lawrence Gunther, a legally blind environmental advocate documenting the effects of waste, sewage, and pollution on fish populations and water supplies. The most gorgeous looking film at this year’s festival (which actually says a lot for an environmental film showcase), What Lies Below balances the personal, the political, and the environmental wonderfully, making the audience learn just as much about Lawrence as they do the world around him. It’s a disarmingly emotional experience that proves beyond a shadow of a doubt (and please pardon the pun) that we can’t keep turning a blind eye to how we treat the world around us.

What Lies Below is set to appear in another four festivals in 2017 throughout the world. Broadcast Deals are being signed with CBC’s Doc Channel and AMI TV.

Exhibits:
Blue Fish exhibited over nine days at two outdoor shows in Ontario in 2016 to an estimated 150,000 show visitors. Our exhibit spaces (Ottawa – 20-30, and Toronto – 20×50) were generously made available at no cost by Canadian Sportsman Show Management Services. With Guide Dog “Moby” in attendance and a quality Shimano spinning combo to raffle off, we had a steady stream of visitors scooping up free clean-up kits and stewardship training materials, and making cash donations. .

Shoreline Clean-Up Kits:
Blue Fish Canada continues to work in partnership with the City of Ottawa to distribute free shoreline clean-up kits consisting of a garbage bag and disposable gloves contained within a 5”x6” thin biodegradable wrapper. Over 3,500 kits were distributed by hand, and are available over the Blue Fish Canada website. 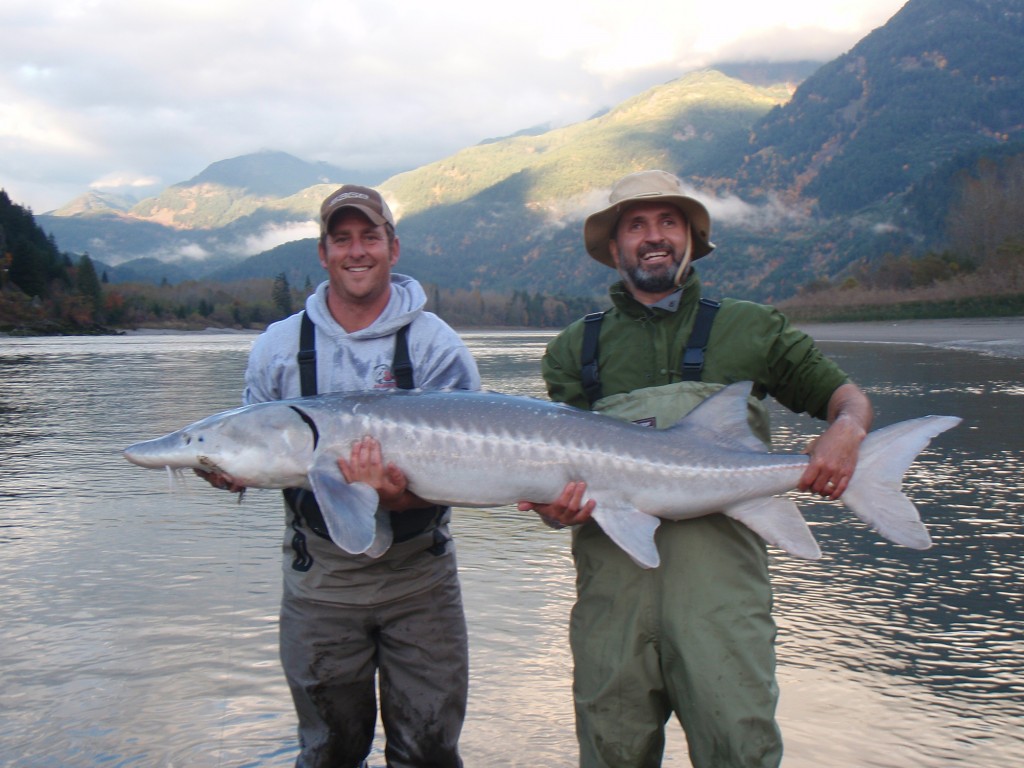 Stewardship Training Materials:
The “How to be a Steward of your Favorite Fishing Hole” brochure continues to be distributed for free over the internet and by hand. Over 2,000 copies were distributed in 2016. The brochure is packaged with a 3’x8’ double-sided leaflet explaining the mission of Blue Fish, and a $5 pet food coupon from Eukanuba. 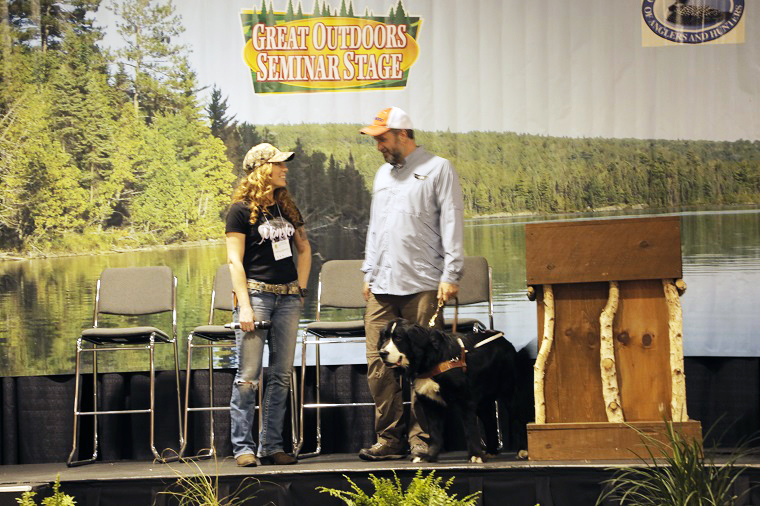 Lawrence and Moby on the Great Canadian Seminar Stage

Seminars:
Fifteen seminars / key note addresses were delivered throughout the year featuring the mission of Blue Fish, why the programs are necessary, and the positive response from the public, water activists and anglers. Seminars generate working capital through donations to Blue Fish. 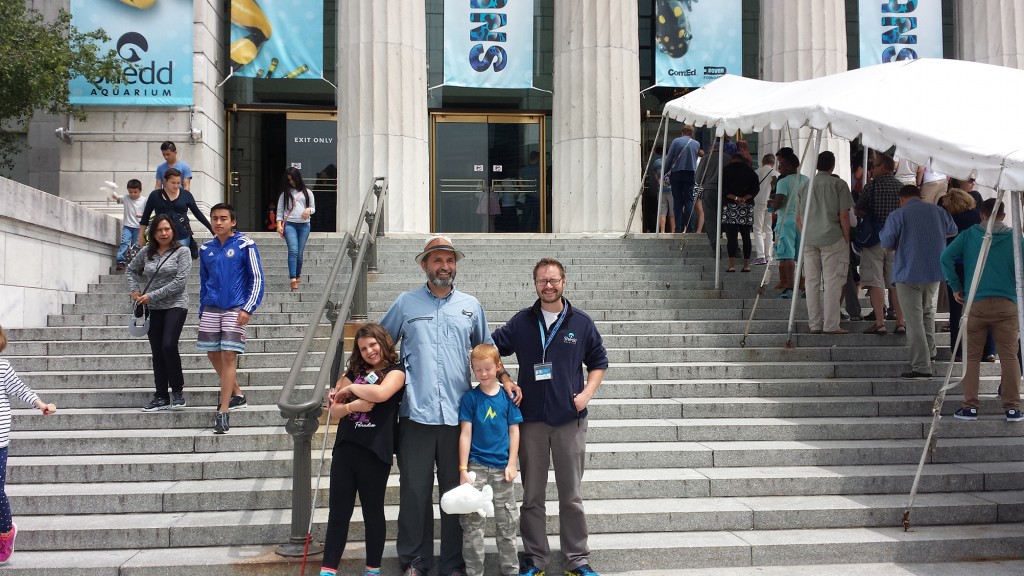 Research Aquariums of North America:
We have now featured the research, conservation, rescue, volunteer, and education programs offered by nine leading aquariums across North America through 20 blogs and podcasts. The many partnerships formed through the initiative have resulted in considerable increased awareness of the important stewardship activities underway at both public aquariums and Blue Fish, and are serving to further educate anglers about fishing sustainably.

Donations:
Our partnership with “Canada Helps” continues to generate on-line donations. We are also beginning to see larger donations being made directly to Blue Fish from private individuals. Operating costs for Blue Fish are directly related to program delivery, which are implemented at no charge by our volunteer directors and volunteers.

Looking Forward to 2017:
*Discussions are now underway with the Vancouver Aquarium to establish a partnership between Blue Fish and their Great Canadian Shoreline Clean-Up initiative. They are looking to Blue Fish to bring Canada’s angling community into the initiative, and Blue Fish is seeking to build on their on-line mapping tools to further connect anglers to the care and cleaning of their favorite fishing holes.

*More seminars and festival screenings of What Lies Below are being planned, with the next phase to include TV broadcasts. Only after these channels have been fully tapped, will on-line “view on demand” services be established. All revenues generated by the doc continue to go to Blue Fish.

*Eukanuba has committed to continue to support Bleu Fish with the donation of pet food coupons and prizes. The coupons are being packaged with Blue Fish literature. Affiliations with pet and outdoor stores are being explored to distribute the material directly to customers, and to generate donations at point-of-sale.

*Presentations to clubs, organizations and corporations will continue, as will guest appearances on mainstream media. They love the narrative of a competitive professional tournament angler, who happens to be blind, cares about the future of fish and fishing and has a great looking guide dog”! It’s a 4-prong message that resonates strongly with the public, fellow anglers, water activists and dog lovers alike.

*Multi-media awareness and educational materials will continue to be produced and disseminated both directly and through partnerships. Subjects will focus on things we can all do to ensure the future of our water and fish. Guests and locations will be selected to demonstrate the positive impacts such actions have on aquatic ecosystems and fish populations.

*Last, an on-line stewardship quiz is in development for use as an educational tool. Those who take the quiz will be signed up for the Blue Fish newsletter and have their names entered into a draw to win a Shimano spinning combo and many other prizes.