The privately funded documentary, What Lies Below, was created, researched, written and hosted by Ottawa native Lawrence Gunther, North America’s only blind professional tournament angler, and the founder of Blue Fish Canada, a registered charity dedicated to the future of fish health and sustainable fishing. 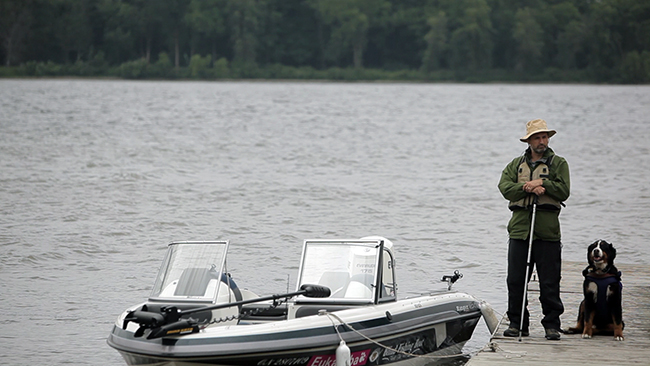 The following short review was published after What Lies Below premiered as the closing film at the Planet in Focus Film Festival to a packed house at the Hot Docs Theatre in Toronto:

From TheGate.Ca: This year’s closing night film (screening at Hot Docs Ted Rogers Cinema comes from Canadian filmmaker Emanuel Hoss-Desmarais, whose last film was his stunningly gorgeous debut feature Whitewash, starring Thomas Hayden Church as an alcoholic Quebecois plow driver who makes a deadly misjudgment. His follow-up is What Lies Below, an equally stunning documentary that focuses on Lawrence Gunther, a legally blind environmental advocate documenting the effects of waste, sewage, and pollution on fish populations and water supplies. The most gorgeous looking film at this year’s festival (which actually says a lot for an environmental film showcase), What Lies Below balances the personal, the political, and the environmental wonderfully, making the audience learn just as much about Lawrence as they do the world around him. It’s a disarmingly emotional experience that proves beyond a shadow of a doubt (and please pardon the pun) that we can’t keep turning a blind eye to how we treat the world around us.

Gunther’s unique ability to visualize what lies out-of-sight beneath the surface of Canada’s rivers, lakes and oceans is further explored in the following Published review.

A more in-depth interview with the film’s Director provides insight how the eleven stories were chosen and presented.

Gunther’s presentation at a recent U.S. River Keeper conference earned him the Conference’s first-ever standing ovation and a glowing review.

For more about the doc and to preview the trailer, visit: http://whatliesbelow.ca/.

To arrange a speaking engagement with Lawrence Gunther call 613-882-3028 or email Lawrence@LawrenceGunther.Com.

To host a screening of the documentary complete the “Screening Agreement” and return to Melanie Carignan, Director of Post Production, Cinelande Inc. at: mcarignan@post430.com