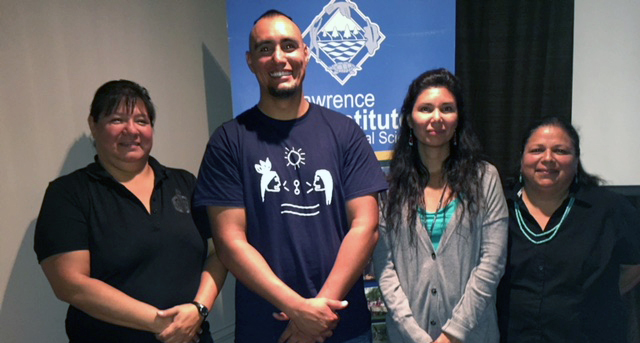 Blue Fish Canada was pleased to be able to take part in the World Wetlands Day celebrations in Akwesasne on February 2. Our volunteers distributed a range of fish health and water quality resources and our tips on sustainable fishing. We were part of a variety of interesting and diverse groups of exhibitors representing the scientific, conservation and youth engagement initiatives – all of which were well received by the Mohawk community and people from both sides of the Kaniatarowanenneh (St. Lawrence River).

The three Mohawk communities situated on the St. Lawrence have worked hard to protect and restore wetlands along the River. Heavy industrialisation during the first half of the 20th century and lax pollution control measures meant severe contamination of wetlands and the River that are still impacting the River to this day. Warnings and outright bans on consuming Walleye for health reasons remain in effect. Numerous areas of concern have yet to be addressed, but progress is being made.

In spite of remediation challenges, Efforts by the Mohawk Council to reconnect their youth to the River through fishing are underway. Youth and their families visiting our Blue Fish Canada exhibit Sunday demonstrates that these community initiatives are paying off, as made evident by the participation of the Mohawk nation in the Pan American Bass Fishing Tournament on the St. Lawrence River organized by Bob Izumi and the Canadian Sportfishing Association in 2019.

Blue Fish Canada volunteers and our president Lawrence Gunther were humbled when they met the many Mohawk youth, their families and elders, and heard the passion in their voices for the St. Lawrence River. It comes from the thousands of years the Mohawk have lived along the River’s banks. It’s a connection that has been undermined by the mess heavy industries from early in the previous century left behind. “We all love the River”, says Lawrence Gunther, “and feel the pain of not knowing if Walleye caught can be safely eaten, or if it’s one of the heavily contaminated fish that make up two of every ten fish according to research underway”.

No one can deny the St. Lawrence is still a beautiful part of earth, and one that deserves celebrating and our respect, such as through this World Wetlands event hosted by the Mohawk Community of Akwesasne. ”

Link here for a first-hand account of the Mohawk people’s fight to restore the St. Lawrence River and to strengthen their connection to the River on Blue Fish Radio first aired in 2017.